March 9, 2020, was our last Head Room Sessions and arguably, one of the best. We had a full house of old friends and new, and the laughter and music was flowing effortlessly. I stood behind the bar tearing up as I watched people connect through the joys of music, something I’ll never grow tired of. Our Cofounder Matthew and I high fived or grinned every time we passed by each other to complete a task, a silent confirmation that once again, all our hard work had paid off.

Afterwards, we had a sentimental meeting with our volunteers. It was becoming clear we were about to be selling out all our sessions, and we wanted to be sure we knew the team’s goals as we grew. Again, I teared up from joy and inspiration (I’m a crier, okay?!).

That night, I posted a picture one of our photographers had taken of me laughing joyously into the microphone. In the caption, I wrote “It’s one thing to have a dream, it’s a whole other level of joy to have people to share it with.” If only I’d known then how true it was, and how much I would long for this feeling for months to come. Even better would have been if I’d known that I’d get this feeling again from a child’s toy. 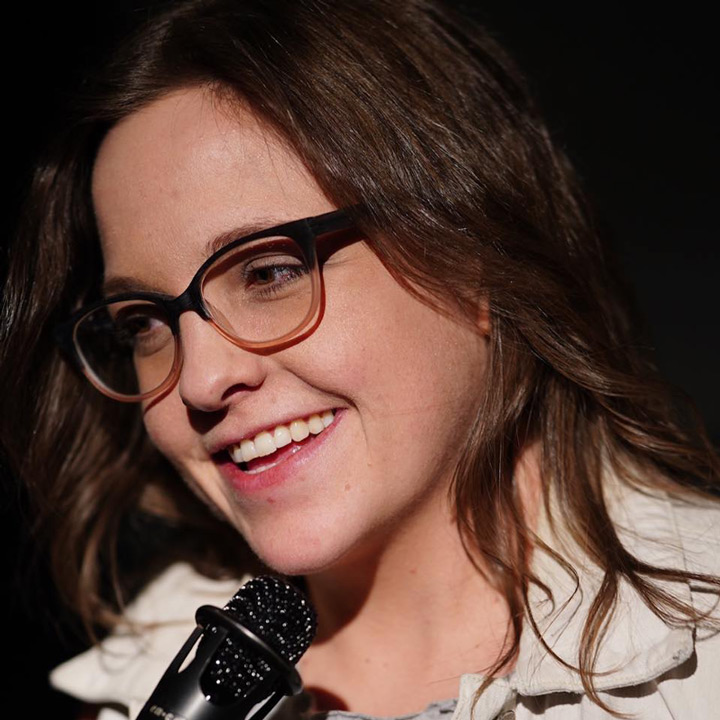 A few days after the session, Matthew and I visited the PBS12 studio for a meeting. This had become one of our favorite errands as an organization. Being in the studio always gave me a special high that made me feel right where I needed to be, and chatting with the Director of Production Heather Dalton never failed to get our gears turning.

This time, while we were just as thrilled as in the past, there was another feeling in the air: one of dread and unknowing. That morning, it was confirmed that due to new city safety restrictions we’d be social distancing, and that meant no more live sessions. With that, we needed to hit the drawing board to see how Head Room Sessions — the place we’d poured our passion, creativity and overflowing love for the city into for 3 years — would survive.

It seemed obvious that the only solution in the moment was to move programming online. We created Bed Room Sessions, a talk-show style release of home recordings from local artists and collaborated with We Are Denver and other organizations on a 24/7 livestream of local talent.

Soon came the brutal murder of George Floyd. The haze of dread became a storm cloud, and we had to build a shelter quickly. If our mission was really to help promote diversity in the music industry, now was the time to show it. But we were nervous…now the question wasn’t just how we would keep people’s attention. Now, it was time we determined what role would we play as an organization during a historical movement. How we would authentically and effectively advocate for anti-racism practices. We paused all programming and handed over our platform to Black community leaders.

For a while, this got us by. We were blown away by the wisdom, strength and vulnerability of our panelists, and we had a new perspective on how we would approach social issues. We weren’t going to stay quiet when we saw injustices anymore. Our platform was Denver’s platform. But once the panels ended, it felt like our purpose was paused, too. We were out of money and ideas. The doubt had set in again. I might even venture to say that while we didn’t say it off the bat, we were both wondering if what we did was even worth it anymore.

We were in this for the connection, the face-to-face moments you can’t plan online. Did we really want to be glued to a screen even more than we had been? Plus, with so much going on in the world, who were we to promote our little organization? How would we sustain purpose without an audience?

Matthew and I held an emergency meeting in Cheesman when it was clear we were both becoming grumpy and existential. We brought beer and a blanket and spent the first bit catching up and laughing, a great reminder that before business partners, we were friends. We made a pact to chase fun again. Joy spreads joy, after all. And as I learned at the Girls Rock Camp Alliance conference for feminist activists, joy during times of hopelessness is an act of resistance.

Soon, our saving graces arrived: Puppet Elle and Puppet Matthew. Matthew had come up with the idea for puppets as the result of our contract with PBS and a puppet we had floating around called Boundary Bonnie. Boundary Bonnie was conceptualized after a weird uber ride. I had been sitting behind the driver, my friend on the other side, when the driver kept insisting I show him my “beautiful face.” I panicked, ducked, and made a puppet with my hand, placing it where he could see and shouting, “Hellooooo!” I mean, what would you have done? 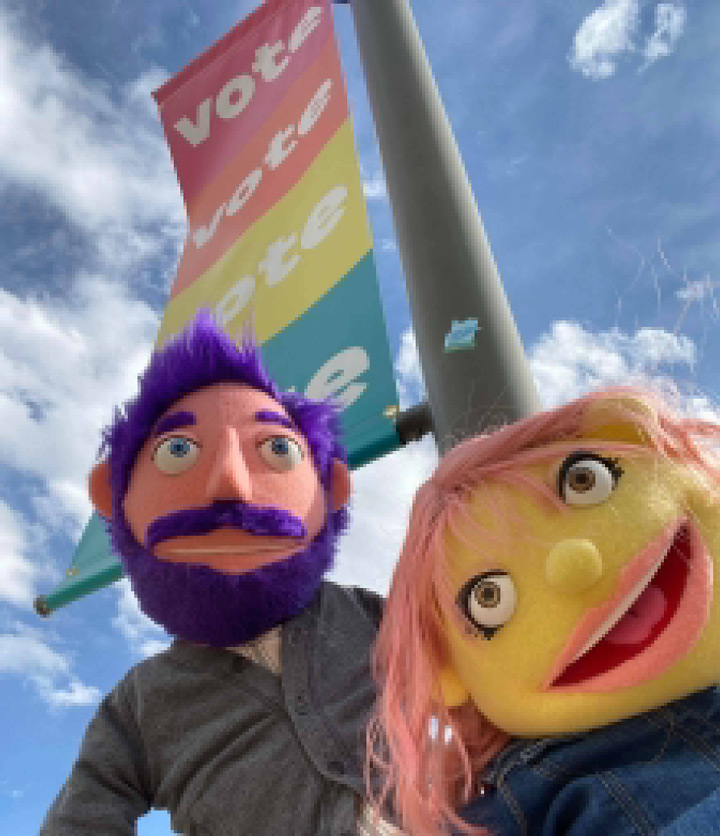 A couple weeks later Matt found a disheveled yet delightful puppet at an estate sale and gave it to me as a tool for issuing boundaries in the future. Boundary Bonnie was a puppet I would use to express boundaries “Elle” often couldn’t. She could often be found behind the bar at Recreative shouting “NOOOOO!” to a young student without an ID, or “NEXT!” to someone lingering in line, and you know what? She was respected, damn it.

Our friend and local designer, Jessica Polzin, caught wind of the idea, and mentioned puppet making was something she’d always wanted to try. Needless to say, we took her up on it, not only excited for the chance to upgrade our telecast, but filled with the child-like thrill of a fun new toy. She took to the task like a true professional, going above and beyond expectations in her new art.

Best of all, the timing of their arrival couldn’t have been any better. While we had committed to pursuing fun in our business endeavors, doing so online still only gave us a small portion of the rush we were used to. It felt like we had to run marathons to get a small hit of dopamine. We would be enjoying ourselves on a livestream, then when it came time to close my laptop again, loneliness rang in my ears like a new form of tinnitus. I needed help. Head Room Sessions needed help.

The puppets provided creative redemption right away. As soon as we slid our new friends onto our arms, we were babbling with ideas. We’d decided to make them the hosts of our PBS Telecast (naturally), and to take them to film in places in the city we thought deserved some attention. I found myself with a new skip in my step as we hauled our puppets into our first location, Lady Justice Brewing.

When we walked in, all eyes were on our puppets. For the first time since social distancing began, I was able to tell people were smiling through their masks. The presence of the puppets alone sent a wave of joy through the brewery, and soon the whole place was taking part in puppet playtime. I rejoiced in the sound of laughter.

Our puppets interviewed one of the bartenders, took pictures with patrons, and got ID’d by the manager before we headed out to our next location. This time, both of us had a pep in our step.

We took the puppets to Cheesman to lounge in the grass, close to the same spot where just a couple weeks before we had vowed to grant ourselves some fun through the madness. We took them to our friend’s bar in his apartment, where he taught our puppets to make a cocktail. Afterwards, our puppet selves watched the sun set over Rocky Mountain arsenal. We even took them to turn in our ballots a few days later.

When my puppet made mistakes during filming, I was more forgiving of her than when I had goof ups myself. Now, mistakes were just funny. Puppets are made for jubilation, not judgement. After a couple days spent belly laughing, cruising Colfax, meeting strangers and giggling with old pals, we were finally reminded that we weren’t alone: that we had playmates all over the city and best of all, we still knew how to make them smile.

Since the arrival of our small, fuzzy alter-egos, the ideas and laughter haven’t stopped flowing. I’ve always known puppets had a special wonder to them, one that turned any adult into a kid again. What I didn’t realize was the incredible changes in mental health that occur when this happens — how play reminds you of the depths of your imagination, your special sense of humor, the unique ways in which you connect with others. Play provides purpose. Purpose that we had been craving to our core, one that had us desperately grasping anywhere we could when it was patiently waiting to arrive all along, riding on the back of creativity.

I’ve always said there are guardian angels all around us. In 2020, I learned to find them in the most unexpected of places — this time, it was in a Styrofoam and felt version of myself.